Montage is used by a researchers as a tool to support research and develop new data products. This post will summarize three research papers submitted t0 peer-reviewed journals in 2011. Each of them used Montage to create image mosaics that were used for subsequent analysis or federated with other data sets.

Hajian et al (2011) used data from the Atacama Cosmology Telescope (ACT) and the Balloon-borne Large Aperture Submillimeter Telescope (BLAST) in their study of correlations in the Submillimeter Background at  250, 350, and 500 μm (1200, 860, and 600 GHz). They used Montage to reproject and rebin the BLAST data to the same projection and sampling as the ACT data. 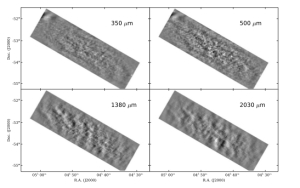 In their study of characterizing the precursors to stellar clusters with the Herschel Space Telescope, Battersby et al (2011) used Montage to mosaic 24 μm Spitzer images to allow them to be analyzed along with data at other wavelengths.

Govoni et al (2011) used Montage to build radio maps at 1400 and 325 MHz to study diffuse synchrotron emission in the Galaxy cluster A781.